Several months ago, I bought one of those fancy planners.  You know, the ones you see all over YouTube and Etsy with all the bazillions of cute little stickers you can put in them?

Since I was contemplating starting my own sticker business, I bought one, along with several sticker sets from different Etsy stores to try out.

I mean, it’s not the planner’s fault.  It was cute, it was in some colors I liked, and I truly thought I would use it.  It’s not the stickers’ fault – they were all cute and/or useful.  I bought a set of budgeting stickers for April (so I bought the planner even before that) and some other just cutesy stickers to decorate as I planned.

I even bought a couple of sticker packs made for the planner I bought that were digital downloads so I could try that out.  After the printing fiasco of those, I finally got them ready to use.

Now, I use a planner all the time.  I prefer the month-at-a-glance ones, rather than week by week, so that was probably my first fail.  The planner I bought does have a monthly view, but it’s pretty small and followed by weekly spreads.  So, not really enough space for what I wanted for the monthly view.

Looking back through the planner, I used it for, yep, two whole weeks.  It just felt, forced, I think.  Like I was trying too hard to make it ‘cute,’ when what I need from my planner is functional. 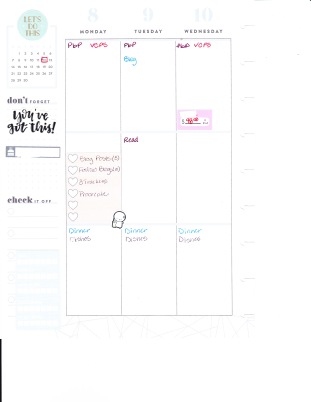 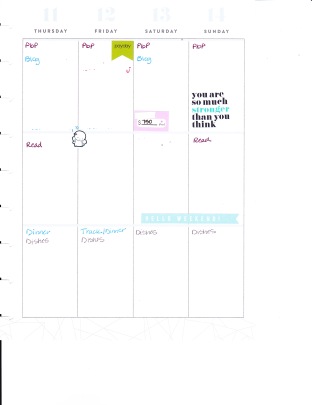 I was a bit frustrated, thinking of the money I wasted on this planner (even on sale, it was around $35) and the stickers.  As you can see above, none of the stuff I put in the planner actually got checked off, so I clearly accomplished a whole lot of nothing that week.

I pulled the planner out while I was writing this post and realized I’ve only got 3 months left to use it.  I can buy other pages and take out the ones that are currently in there, so it’s not a total loss, but I doubt I’ll spend that much to replace something I didn’t use in the first place.

Now I’m thinking maybe I’ll use it as an editorial calendar for the blog.  Then it won’t matter how messy it gets, right?  😛  Since it’s only usable til the end of this year, that seems like a good plan.  I’ll probably keep the little discs and the cover, but I’m not even sure about that.

Ah, well, another lesson learned, right?  At least I’ve narrowed down what I don’t want in a planner.  Now – what to do with all those stickers??!!