I’ve been doing all sorts of things to keep myself occupied, including (gasp!) cleaning my house.  Sometimes, though, I want an activity where I can just zone out – listen to some music, or some of my favorite Forensic Files podcasts and just zen.

Puzzles are one of my favorite ways to do that.  So I pulled our card table out of the garage and set it up in the living room so I have a space to leave the puzzles out until I’m done with them.

I have a handful of puzzles, most of them 1000 pieces.  I’ve put them all together before, but it’s been a while, so I thought I’d do it again.

The first one I picked is an old-timey picture with a western Main Street and trains and mountains in the background: 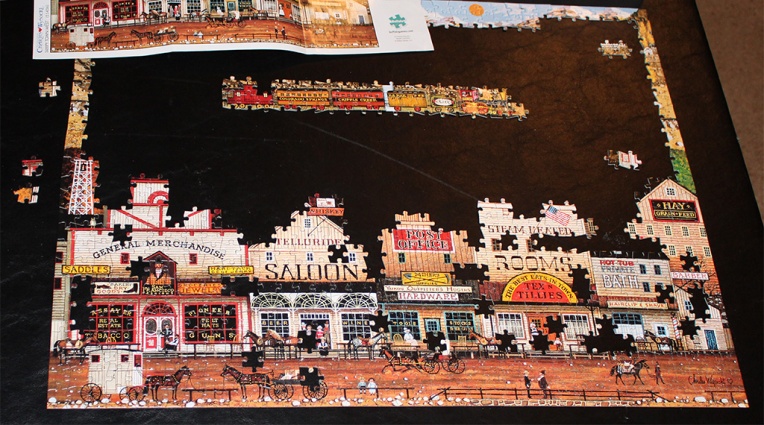 I always start puzzles by separating out all the edge pieces and putting them together first, so I have a starting point.  Invariably, I miss at least one edge piece during the first sorting.  This puzzle was a little easier than some, because the storefronts all had writing on them, which made it easy to put the pieces together.

It went quicker than I thought – filling in all the trees was a pain in the behind, though!

It only took me a couple of days to finish this one:

Then I moved on to the next one – it only had 500 pieces, so it went more quickly than the first puzzle.  This one is a Route 66 puzzle, with a map of various stops along the way.  I’m saving the Star Wars one until last – it’s one of those that has tiny pictures that make up the bigger picture, and it’s a real doozy! 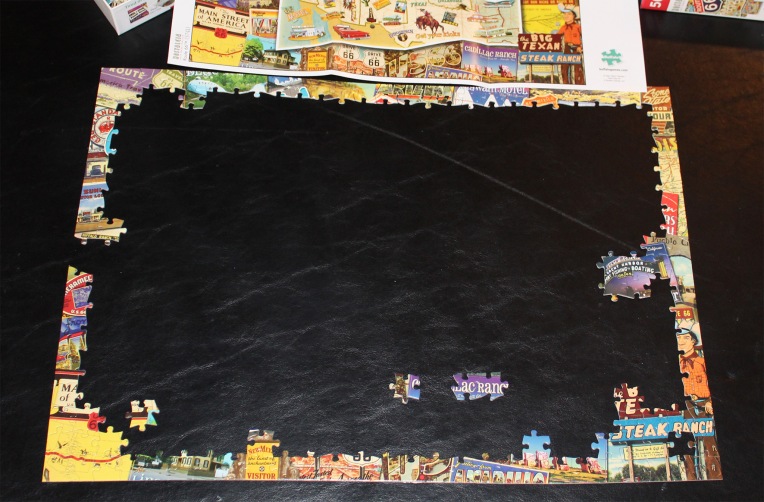 Again, this one was probably easier than some because of all the writing on the various pieces.

I did another puzzle, but I forgot to take pictures of it.  Then I put the puzzles away for a bit while I work on painting some miniatures for a painting challenge.  I’m using the card table for that, so that I can leave all my painting stuff out instead of having to pack it up each night off the dining room table so we can eat dinner.

If nothing else, having the card table covered with painting stuff is motivation to get the stuff painted, because it’s messy to look at and drives me crazy! 😛